Most dogs love water. Drinking it, playing in it, swimming in it, or whatever floats their boats. Having fun is something that just about any dog is up for, and if that includes splashing around in a pool or a lake, hey — fun is fun! 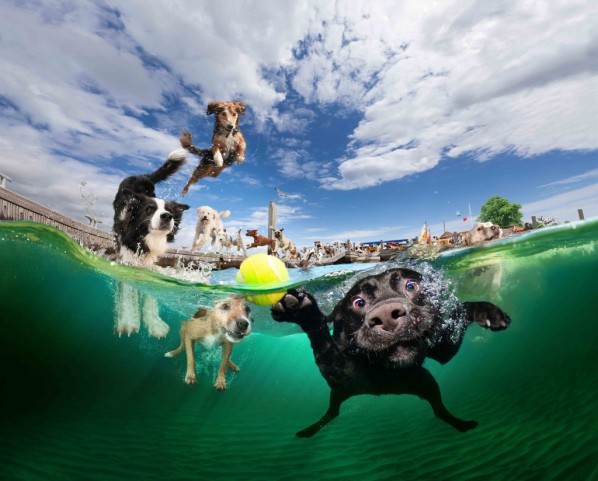 That’s why photographer Seth Casteel started photographing them underwater a couple of years ago. Since then, he hasn’t been able to stop. He now photographs dogs for a living, mostly underwater.

His book of underwater dog photos, aptly titled “Underwater Dogs,” was the best-selling photography book in 2012. As of this writing, he’s photographed over 250 submerged canines. Here’s a pup who’s looking happy to have a portrait taken.

This pup just has to have that ball! It must have dived with plenty of speed to stir up all those bubbles. That is one enthusiastic pooch!

Seth volunteered to take photos of homeless animals in 2007, helping to find many of them new homes. They may not have been underwater, but it still worked. The number of dogs that were adopted from that shelter increased substantially just after the photo shoots.

Seth spends much of his time these days photographing pets. He accepts commissions and shows his work in galleries all over the world. Sounds like pretty scary work: the pooch in this pic looks like he’s coming to get us!

This fierce-looking battle is really just playful good times. We hope! But what happens if they both get it? Well, we’re rooting for the one on the left!